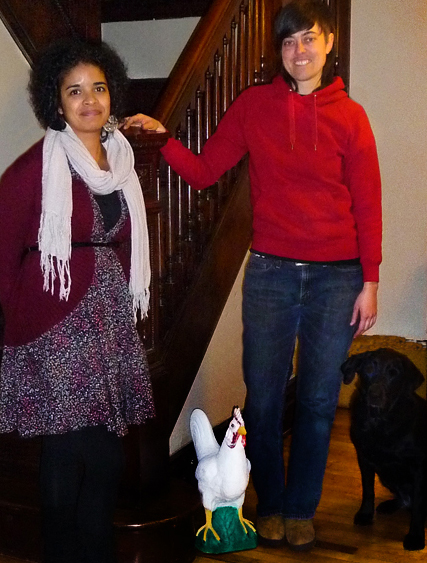 Meet one of the latest families to buy a house rehabbed by PRG: Venessa and Crystal, pictured here without camera-shy six-year-old son Felix, but with sweet dog Parker. The family moved in January to this Midtown Phillips house—renovated by PRG and made more affordable by the City of Lakes Community Land Trust.

They’d been living in a “quaint, very small” apartment in Powderhorn, an area to which they were committed. Crystal’s job at a nearby nonprofit, as well as lots of community connections, made them want to stay in the area. “It’s a great part of town,” says Venessa with fondness. “So vibrant and weird.”

Home ownership had been a dream, and they looked at a handful of market-rate houses last summer, but the quality and affordability here were beyond compare. Even with Venessa’s reduced employment after funding cuts at the arts organization where she’d worked for 10 years, buying this renovated home was a real option.

Venessa and Crystal can list wonderful things about the house faster than I can write them down: beautiful, completely renovated, new roof, new appliances, new furnace. Well put together. A gift. Life changing.

They describe the “awesome team of advocates” from PRG and the City of Lakes Community Land Trust. “It was a charmed process,” said Venessa, and told how little stress they felt during the process, a surprise after hearing stories of friends’ harrowing home purchases.

“I still don’t believe it,” Crystal said, “It’s really too good to be true. It’s like a magical spell happened.”

It felt like magic, but the move to home ownership also took some real guts on the part of Venessa and Crystal. Both are first-time homeowners, with parents who purchased homes later in life; it’s not a process or institution that either of them grew up with. Crystal grew up in Navy housing or renting in the cities where her dad was serving. Venessa lived in the Minneapolis area with a single mom, always renting.

“Now we’re learning how to own a home,” Venessa says. “To be able to give this to my kid feels really, really good.”